The Stories behind the Names on the War Memorial

Brockenhurst and the Two World Wars, a village Millennium project supported by both the Parish Council and the Friends of Brockenhurst, has now been published and is on sale at Londi's in Brockenhurst at £10 a copy.

The book, compiled by John Cockram with the assistance of villagers past and present, presents profiles of villagers who died in the two World Wars. The names of eighty-six such villagers are recorded on the War Memorial, with ages ranging from 17 to 44. Additionally, twenty-five villagers who died in the First World War yet are omitted from the Memorial, have also been identified - as are two Merchant Navy men and six Civilian casualties (including four children) from the Second World War.

The death of each of these villagers is put into context by an explanation of the relevant military circumstances of the time. This in turn is placed in context of wider events such as the Battle of the Somme, Dunkirk or the North African Campaign. It is not just a military history, however, as the book is underpinned by the impact of such events on our village. Thus a snapshot of Brockenhurst before 1914 is given as a basis against which village activities during each year can be understood. This treatment is continued into the inter-war period and into each year of the Second World War. The book ends on a positive note with pictures of some of those who returned in 1945.

It is therefore not only a book for the families of those who died - and whose names are read out in church on Remembrance Sunday - but also for those who are interested in the history of the Twentieth Century development of Brockenhurst which has directly led to its present character. In short Brockenhurst and the Two World Wars encapsulate not only the sadness of loss, but also the courage and commitment of our predecessors during those turbulent years. As such it is essential reading for anyone who has connections with the village, as well as for those who wish to understand what makes Brockenhurst such a special place in which to live.

AVAILABLE FROM LONDIS - THE NEWSAGENTS

£10 EACH - ALL PROFITS TO THE ROYAL BRITISH LEGION POPPY APPEAL
Also available from applying to the author using the contact form
at www.nfwmbooks.co.uk or Natula Publications 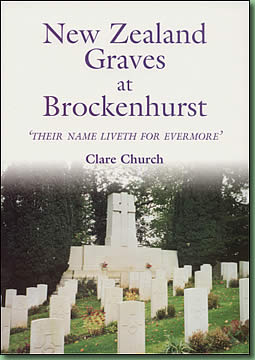 Appendices:
* Immigration to New Zealand of family members (1840-1880)
* Departure dates of the NZEF from New Zealand,
including (where known) name of troopship
* Evacuation from the Western Front, with details of medical care

The book is available from :

"New Zealand Graves at Brockenhurst" is also available for sale at St. Nicholas Church, Brockenhurst, which is open every afternoon between April and late October